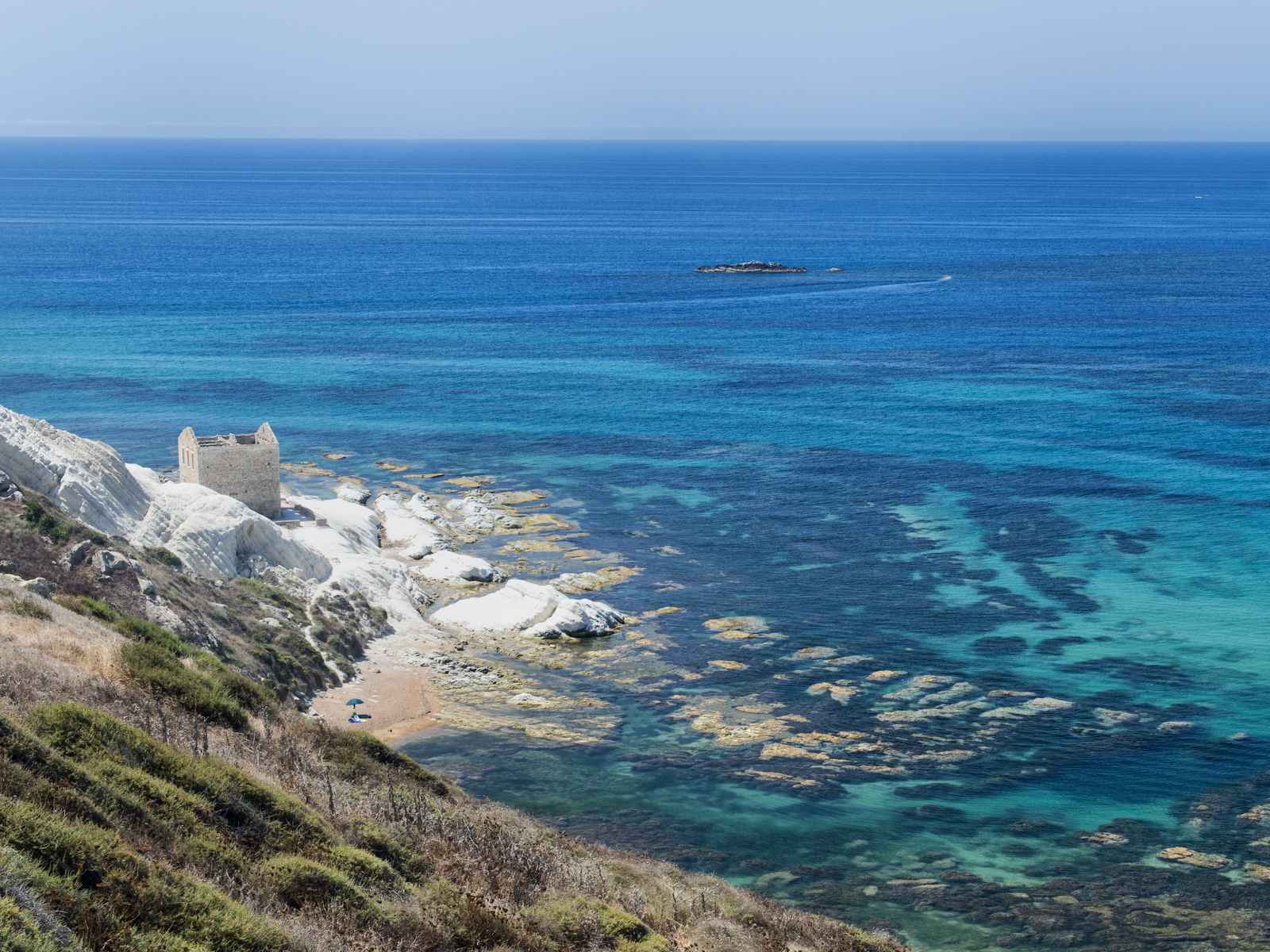 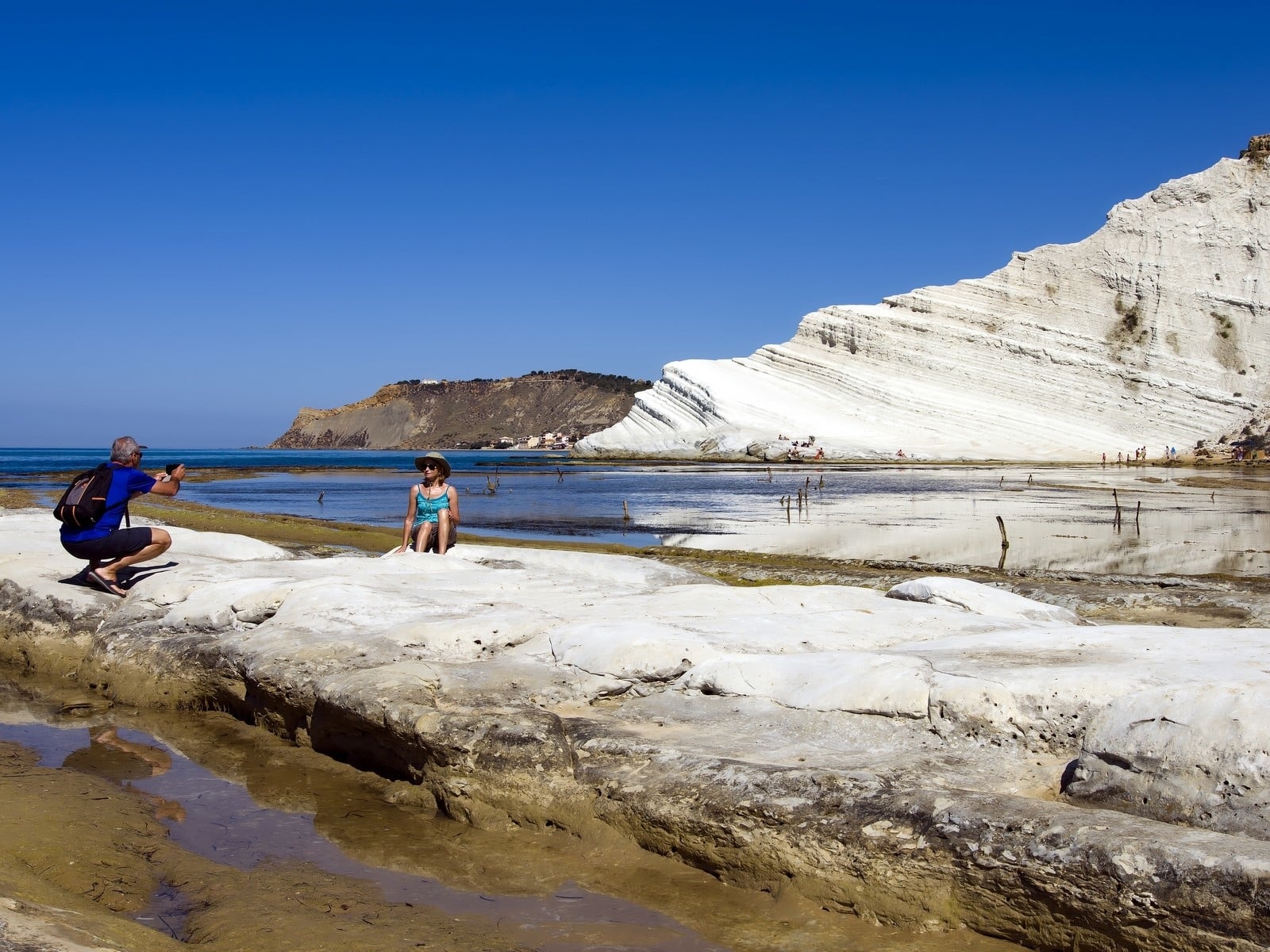 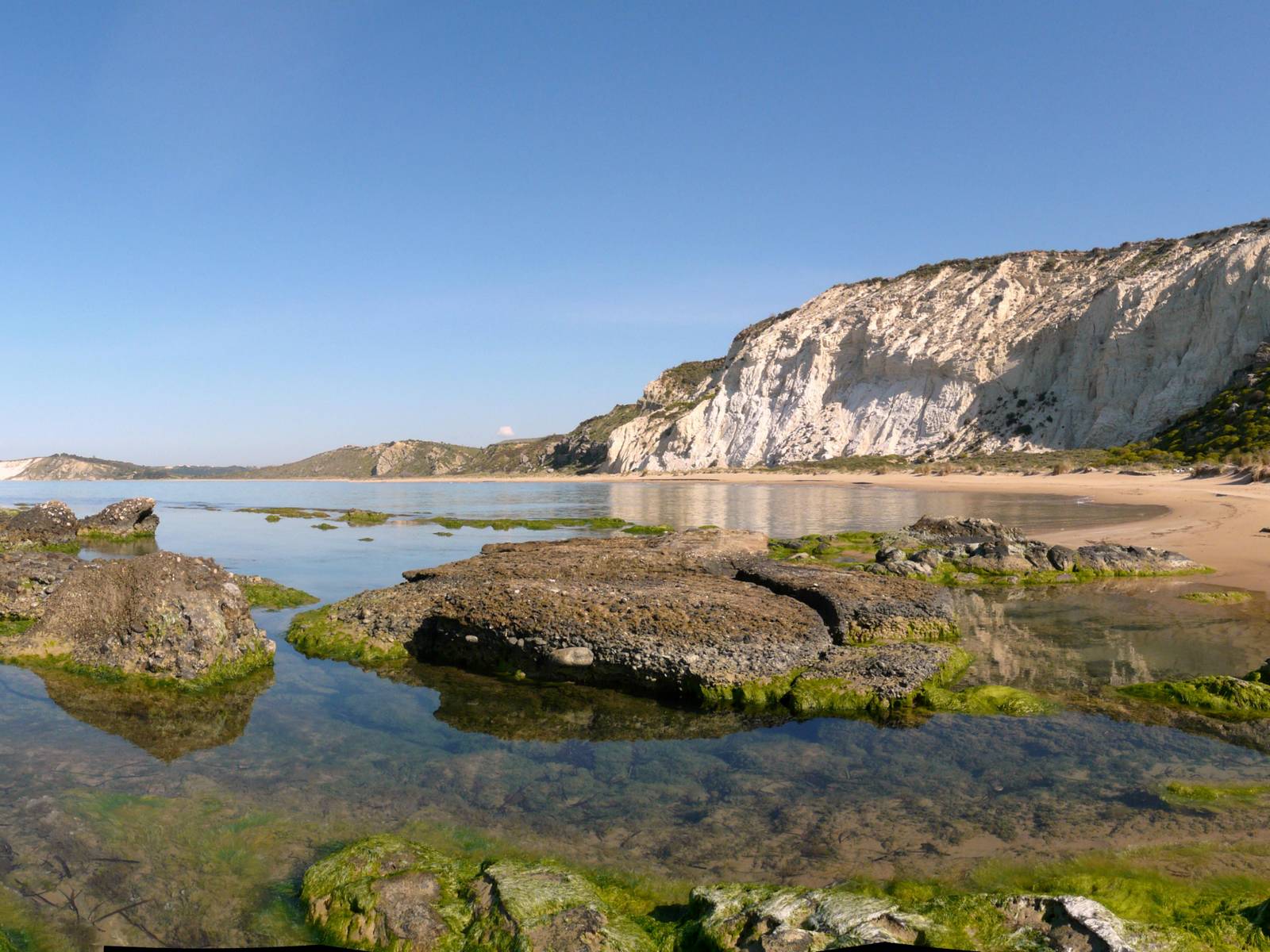 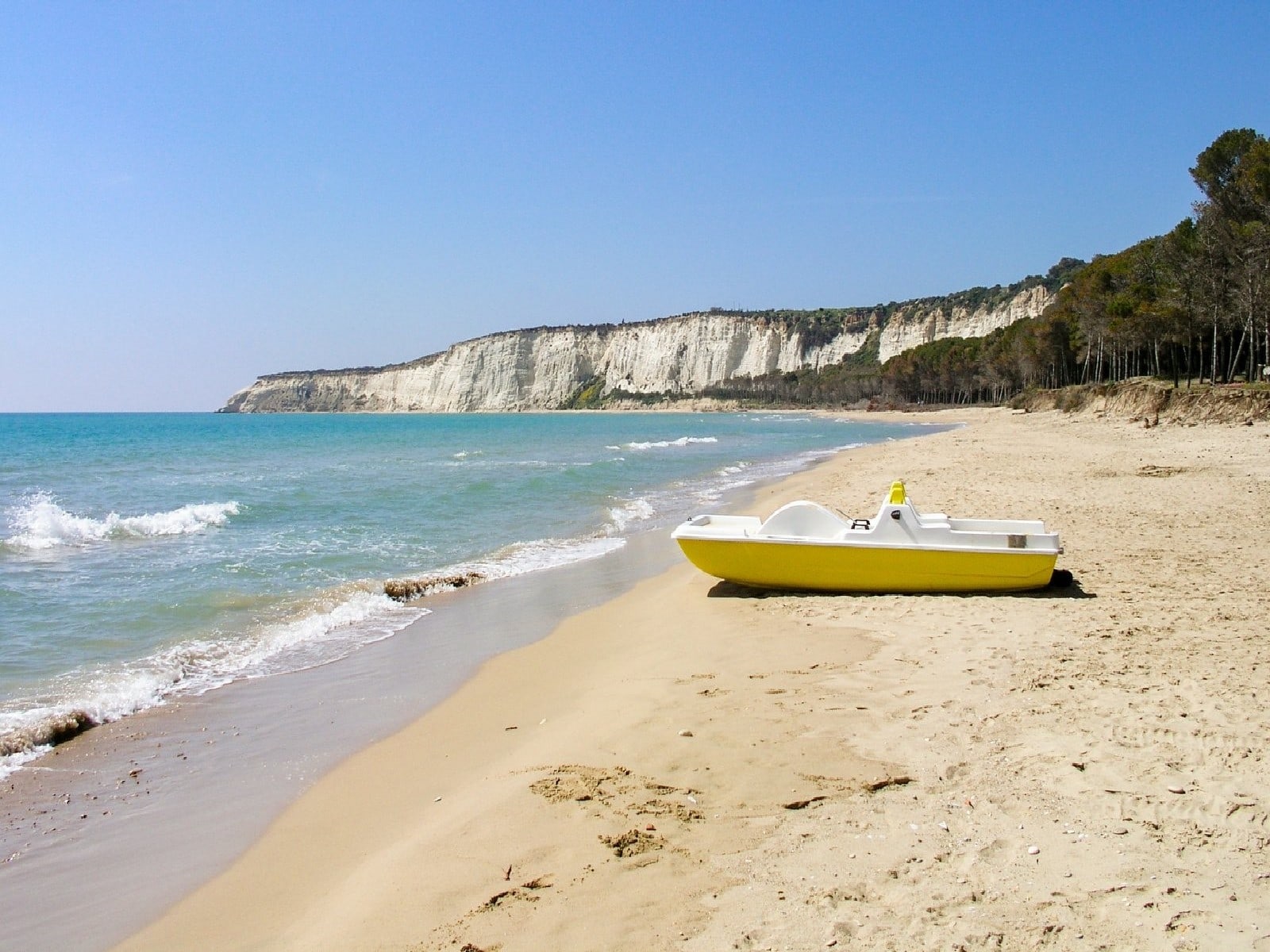 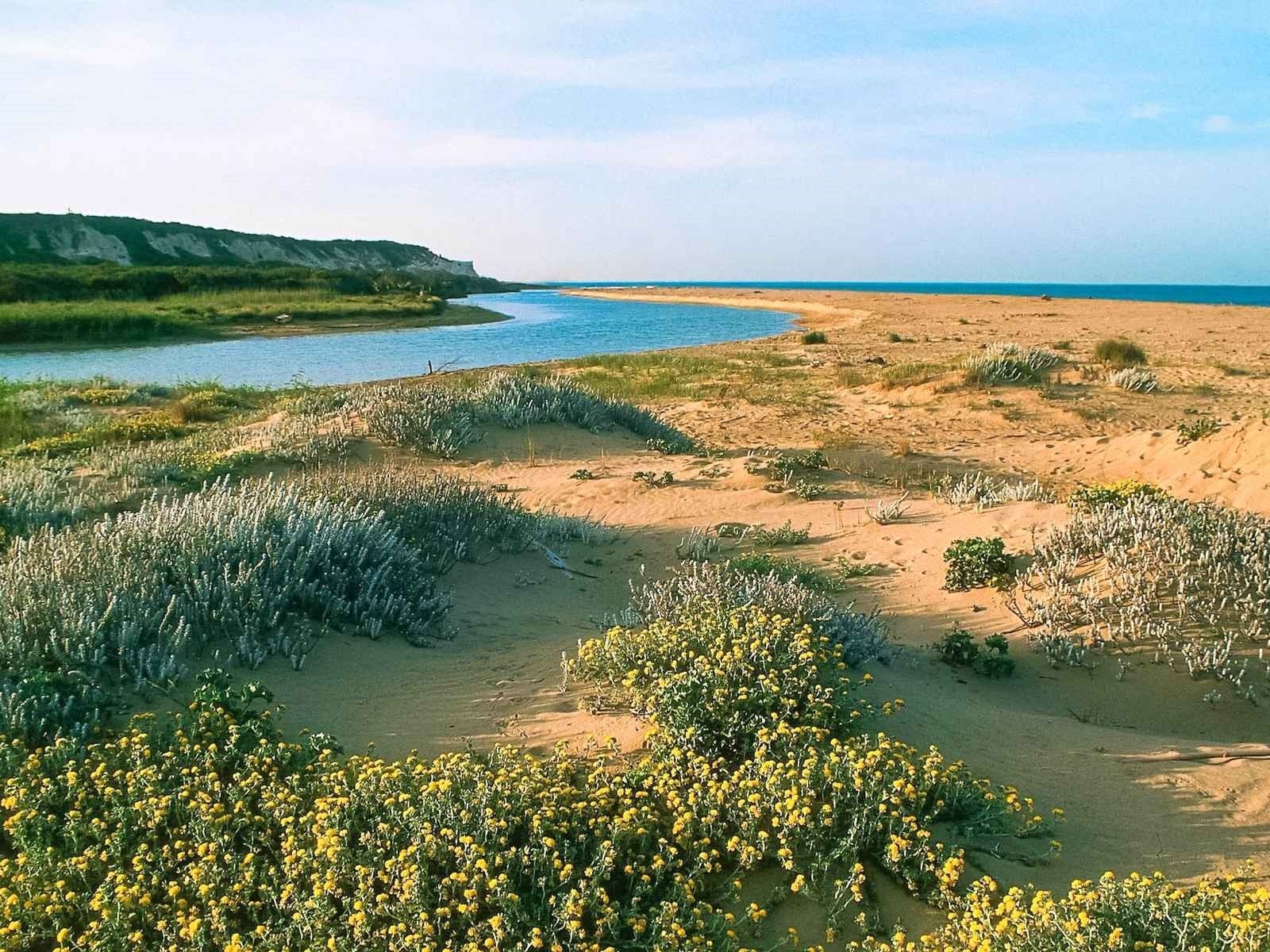 The coast of Agrigento is among the most beautiful coasts of Sicily: sea, beaches and nature reserves are waiting to be discovered. Famous for the Scala dei Turchi, the Agrigento coast offers many seaside resorts of incredible beauty.  Along the 140 kilometers of coast from Licata to Porto Palo di Menfi a succession of sandy coves, cliffs and natural oases bathed in turquoise sea await you.  This very long sandy terrace on the sea is enriched by fishing villages and, in the hinterland, by historical centers, castles and archaeological areas.  We propose two different itineraries to discover beaches, reserves, oases and breathtaking views without giving up on some particular attractions along the way.

The first of the two Itineraries is the “west coast” and it starts in ​​Agrigento.  Agrigento’s beaches stretch from Maddalusa in the west to Cannatello in the east; the beaches closest to the city are located in San Leone, a seaside hamlet just three kilometers from the historic center and the Valley of the Temples with a tourist harbor from which excursions to the Scala dei Turchi and Punta Bianca depart. San Leone is a popular seaside resort due to the many bars and restaurants along the promenade and the beachfront, also perfect after dark for pleasant evenings enjoying good fish and sipping drinks by the sea.  The raw diamond is, however, Punta Bianca: a white rocky spur surrounded by crystalline sea, very similar to the more famous Scala dei Turchi but more rugged and little harder to reach overland.

The most beautiful beaches to the west of Agrigento: from Porto Empedocle via the Scala dei Turchi and the Foce del Platani nature reserve to Porto Palo.

Starting from Agrigento, take the SS 115 towards Porto Empedocle.  Just beyond the Valley of the Temples and shortly before reaching the seaside town of Porto Empedocle, we advise you to stop off in the Caos district and visit the Museum and former home of Luigi Pirandello, winner of the Nobel Prize for Literature and author of famous works translated in all the languages of the world.  Once in Porto Empedocle, take a walk along Via Roma, visit the Port with the impressive Tower of Charles V and take a stroll along Marinella Beach to absorb the atmosphere of Commissioner Montalbano: these are the places which inspired Andrea Camilleri when describing the characters and streets of the imaginary Vigata.

A few kilometers further in along the coast road you will be able to admire the remains of a Roman Villa of the 1st century  A.D.  and just beyond there are two fine golden sandy beaches, Punta Piccola and Punta Grande.  The next stop is at the Scala dei Turchi which offers a scenery of incomparable beauty, especially at sunset when the light is reflected by the white cliffs which gradually change the color, assuming the colors of the sky in a truly unique and unforgettable spectacle.  Beyond the Scala dei Turchi there are several long sandy beaches, one behind another: the first three are Lido Rossello, Le Pergole and Giallonardo and are dominated by a striking promontory overlooked by the Tower of Monterosso, a 16th century sighting tower.

Continuing on the SS 115 you will come across Siculiana, a picturesque old town that we recommend you visit.  A few kilometers from the town is the Beach of Siculiana Marina on one of the most beautiful coastlines in the area.  Not far from Siculiana is the Nature Reserve of Torre Salsa, managed by the WWF, that preserves one of the most beautiful and uncontaminated coastal areas in Sicily.  The coast of the Reserve extends for about 6 km and alternates cliffs, dunes and immense beaches. In this stretch of untamed coast, the endangered Caretta Turtle and the Gabbiano Reale nest.

The next beach, after the Nature Reserve of Torre Salsa, is the Beach of Bovo Marina. Stop off here for a swim if you prefer a well equipped beach: there are various touristic amenities, equipped areas and restaurants.  A little further inland we find Lago Gorgo, a naturalistic oasis where migratory birds stop, ideal for those who love birdwaching. The beach of Bovo Marina is flanked by a pine forest and reaches the beach of Eraclea Minoa, located under a magnificent cliff overlooking the sea of ​​Capo Bianco.

On the top of this long and white promontory there is an archaeological area: ​​Eraclea Minoa, a site of great charm not only for the remains of the town and the stone theater dating back to the 6th century BC  but also for the strategic position from which you can enjoy a truly extraordinary panorama.  Beyond the white rocks of Capo Bianco there is another coastal Nature Reserve: Foce del Fiume Platani. The beaches of this Reserve can be reached from S.S.115 by taking the exit to Borgo Bonsignore, a small seaside village from where it is possible to access the western part of the Reserve. Various paths lead to the sea cutting through the rich and varied Mediterranean scrub: an ecosystem of virgin beauty, natural silence and pure sea.  Continuing west along the coast, past the estuary of the Magazzolo river, you will find the seaside resort of Secca Grande, with its beach characterized by large areas of pebbles and crystal waters. If you fancy making a little excursion to Ribera, famous for its productions of excellent oranges and wild strawberries and for the remains of the superb medieval castle of Poggio Diana, take the SS386 inland from Seccagrande.

To compete the trip along the west coast, continue along the SS115 towards Sciacca and Menfi. Sciacca is a tourist resort of primary importance, a city rich in art and monuments that you should visit.  A popular tourist destination for the sumptuous Carnival, its colorful hand painted ceramics, the picturesque alleys and of course its beautiful beaches. Also take your time to visit the Enchanted Castle: an evocative open-air museum with curious sculptures that can be reached from the SS115, on the outskirts of Sciacca.

The characteristic of the coast between Sciacca and Menfi is the exceptional purity of the sea: crystal clear waters gently lap expanses of golden sand, inlets, rocks and coves. One of these coves is Capo San Marco, an authentic paradise for bathing but also  for surfing, canoeing and underwater fishing.

Beyond Sciacca the SS 115 goes in to reach Menfi, territory rich in vineyards and famous for the excellent productions of Vini Doc, as well as final destination of this itinerary.  The coastal strip of Menfi extends for about 10 km and is characterized by beaches of fine sand and a sea so clean that it has been awarded the European Green Flag, after having maintained the prestigious Blue Flag award for many consecutive years. The Green Flag is the highest level of recognition  awarded for the purest quality of the seawater.  The tourist port of Porto Palo and the Lido Fiori make Menfi an ideal location for a relaxing holiday, bathing in the most pristine waters of Sicily.

This website or its third party tools use cookies which are necessary to its functioning and required to achieve the purposes illustrated in this cookie policy. If you want to learn more or do not consent to the use of cookies, consult our cookies policy. By closing the cookie warning banner, scrolling the page, clicking on a link or otherwise continuing to browse, you agree to the use of cookies.AcceptRefuse